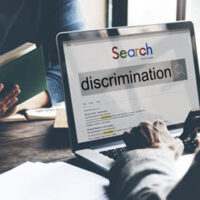 There were many notable employment discrimination cases decided this year, especially those involving sex bias and the Equal Employment Opportunity Commission pushing for LGBT protections under Title VII of the Civil Rights Act of 1964.

Some of those important cases involved the following decisions:

In May, the U.S. Supreme Court ruled that workers cannot file constructive discharge claims until they technically leave their jobs, meaning that workers have 180 days to file complaints with the Equal Employment Opportunity Commission, and that 180-day period is triggered when a worker leaves, not when the underlying discriminatory conduct occurs.

In March, the Equal Employment Opportunity Commission filed a lawsuit against a Baltimore pallet supply company on behalf of gay employees who were allegedly discriminated against. The judge sided with the Equal Employment Opportunity Commission, ruling that shifting social norms made it increasingly difficult to justify depriving employees of workplace protections simply because of their sexual orientation.

Meanwhile, the 7th U.S. Circuit Court of Appeals has now granted en banc review of a ruling which stated that Title VII did not apply to an employee who argued that she was fired because she was gay.

Fox News recently agreed to pay a $20 million settlement to a former anchor who claimed that she was forced out of her job simply for refusing to have a sexual relationship with the chief executive at the time. Additional cases against the former chief executive alleging sexual harassment have also come forward.

Chadbourne & Parke has faced a number of allegations this year, including female partners alleging sex bias in pay and promotions and women who claimed that they were underpaid, shut out of leadership positions, and discriminated against in other ways simply due to their gender.

This year, Lowe’s paid $8.6 million over claims that the chain fired workers unlawfully simply for taking medical leave. Specifically, the company was accused of automatically terminating employees if they exceeded the company’s cap of taking 180 or 240 days of medical leave (depending upon the circumstances).