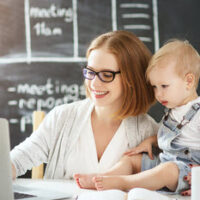 For years we’ve been hearing about the gender pay gap and how wrong it is, but the more difficult question to answer is: when does it show up, and why? One recent New York Times article purports to answer that question, and the answer may not be what you think.

According to the research cited to in the article—which will be published this month in the American Economic Review and National Bureau of Economic Research—men and women are actually paid fairly equally when they first start working after graduating from school. The gender pay gap starts to widen when people reach their 20s and mid-30s, and much more so for married women with children. In fact, according to the data, while college-educated women are making approximately 90 percent of what men make at age 25, that gap worsens more and more each year to the point where women are making only 55 percent of what men by the time they reach age 45.

According to this research, even married women without children start earning less and less in comparison to men, supposedly because women are more likely to pass up job opportunities for the sake of their husband’s job. Sadly, employers are also more likely to avoid giving married women without children more responsibility because they assume they’ll be taking time off in order to have children.

Ultimately, the research reflected the kind of mentality that many of us thought was eroding more and more each year since the 1950s: that one person is focusing on their career while the other one is doing the lion’s share of work in the home. What the research appears to demonstrate is that employers are paying women less under the assumption that they will be less committed to the job and working less once that they have children—even though, for many, this is not the case.

What the research reveals is a certain kind of catch-22: women are doing more of the household chores and child care in part because they are earning less, but they are also earning less because employers are assuming that they will be prioritizing household and child care.

The question ultimately becomes: Why don’t employers simply cut back proportionally to women (or men, for that matter) cutting back on hours? Currently, the research shows that even when mothers cut back at work, they aren’t paid proportionally less; rather, they are consistently paid less than men per hour for doing the same work. Especially when it comes to work that requires having a college degree; employers are essentially paying people disproportionately more for working long hours and less for allotting some flexibility into their schedule.

Other than equal pay laws, is the only “solution” to this issue women avoiding both children and marriage? According to the article, a “fix” needs to go much deeper: specifically, companies would have to place less of a priority on employees working long hours in general and government entities would need to help subsidize child care and parental leave.